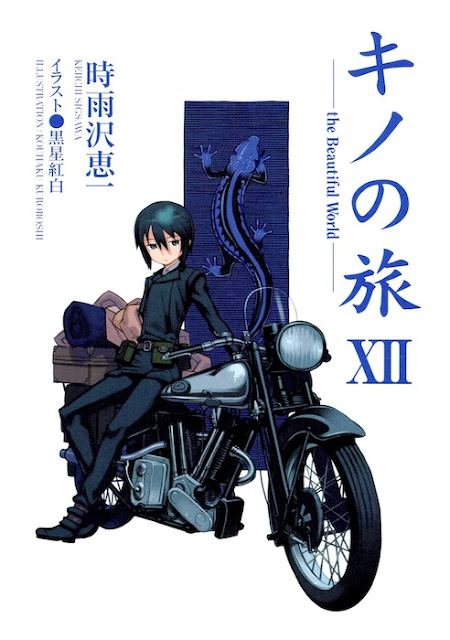 Frontispiece: The Bandit’s Story
-Can You Imagine!-

A pair of bandits set up an ambush in the mountains.

One of them was an elderly man, his face gnarled with age. The other was a young man in his mid-teens.

They stood by a mountain peak. Below was a valley carpeted by a thick green forest. The opposite side of the valley was clearly visible, as was the road that snaked through the base of the valley.

Both men held large binoculars. The round frames of their vision were focused on the road at the base of the valley.

“Elder, I see a car passing through.”

“Yes, sir. The vehicle is a green buggy with a lot of luggage. The driver is a black-haired man wearing a sweater. I can see something like a sword lying beside him. He has a passenger next to him…a little girl. I see a white animal between her knees. It's most likely a dog.”

“I see. Now tell me, are they fit to be our prey? Should we contact the others at the base of the valley and have them attack?”

“Buggies are hard to come by. I'm sure it'll fetch a good price. And judging from all the luggage they're carrying, they must be carrying valuables in stead of money. The man at the wheel might possibly be a skilled foe, but he’s by himself, and couldn’t possibly defeat our guns with a sword alone. The girl and the dog aren’t even worth discussing.”

“Forty points. We must not attack that buggy.”

“As you said, the buggy will likely fetch a hefty sum. But the man in the driver's seat is composed and ready. He is likely a swordsman without peer. And look once more at the girl. Do you recognize the object she is holding?”

“Something black…and round. Is that a bag? Or maybe a doll?”

“That is a grenade.”

“Do you see the cylinder beside the girl's seat? That is a grenade launcher. It can attack us from a distance. One wrong move and we could lose many men at once. And remember that dogs have very sensitive noses. Our ambush would be discovered instantly. That is why we must not attack that buggy.” 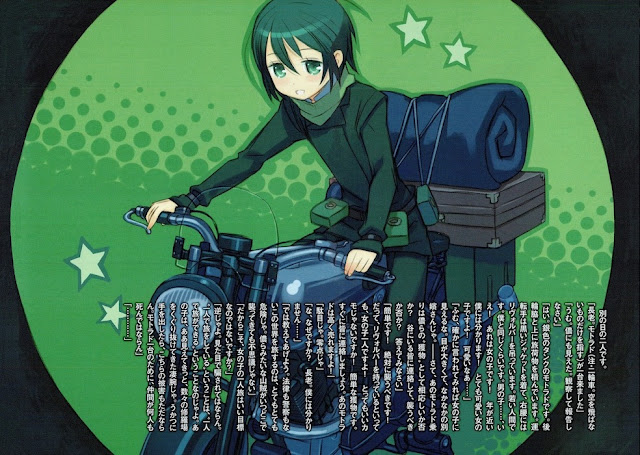 “Elder. I see a motorrad passing through.”

“Yes, sir. The motorrad has a silver tank. There is luggage loaded on either side of the rear wheel and on top of it. The rider is wearing a black jacket, and has a holstered revolver over his right thigh. He's still young—around my age, I'd guess… Wait! That's a girl! I can tell because she's around my age! She's very pretty. Wow…”

“I see. Now that you mention it, you're right. Those large eyes of hers are quite beautiful. Now tell me, is she fit to be our prey? Should we contact the others at the base of the valley and have them attack?”

“Of course, sir! We can't let her get away! She's carrying a revolver, but what can one girl do on her own? She's the perfect target. This will be an easy job! Let's get in touch with the others right away, sir. And I'm sure that motorrad will fetch a good price, too!”

“Listen well. To travel this world is a perilous undertaking. Outside the countries, there are no laws or people to uphold them. It is nothing unusual for travelers to be attacked by bandits.”

“Isn't that exactly why a girl alone is the perfect target, sir?”

“It's the very opposite, boy. Don't be fooled by appearances. The fact that she is traveling alone means that she is capable of traveling alone. She is probably a skilled opponent—a veritable veteran, I would surmise. I would not be surprised if she were willing to kill to keep possession of her motorrad. Would you be willing to risk the lives of our allies for one measly vehicle?”

“My boy, the people we target must be those who delude themselves into thinking that they are strong. Those who do not think before attacking those stronger than themselves. Just like you are now.”

“There, there. Don't let that get you down. You are still young. You have plenty of time to learn.”

“Yes, elder… Sir, I heard once that we began scoping out our targets ahead of time like this only after you joined the assault team.”

“It's an amazing idea, sir. What inspired you?”

“Well…I learned an important lesson a very long time ago. I was still young, you see. That day, we all attacked a pair of passing travelers. It was only a battered yellow car, but at the time…I thought it might fetch a decent price… And there was a man with a terrifying smirk…and a beautiful woman with long black hair…”

“If it was only the two of them, you must have had no problem at all, elder.” 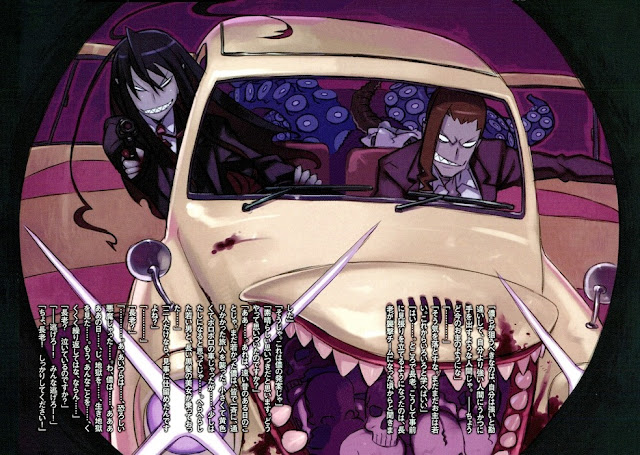 Frontispiece>>
Posted by Untuned Strings at 12:39