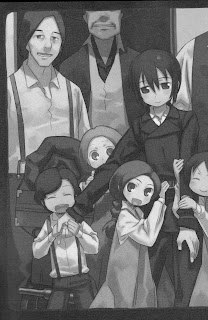 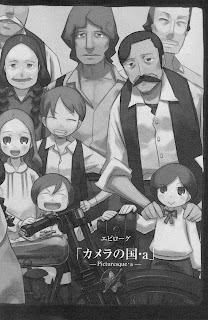 The country was humble and old-fashioned, and not very technologically developed. Its walls were little more than stone fences, but for centuries the people within them had lived in perfect self-sustenance.

Their clothes were made of natural fibers like hemp and silk, and the food on their tables came from their organic grain and vegetable fields. It was the kind of lifestyle considered a luxury in other countries, but for the people here, it was simply normal.

Being the first visitors in a very long time, Kino and Hermes were met with great welcome. Kino was especially moved by the generous meals they served, polishing off every plate with gusto.

Three relaxing days later, Kino and Hermes prepared to set off in the morning.

“Wait!” said one of the locals, holding up a camera, “Would you care to take a picture with us?”

It was a black single-lens reflex camera that took 35mm film canisters, commonly found in many countries. The camera was equipped with a standard 50mm manual focus lens, and a cloth strap for hanging around the neck.

Scratches dotted the camera in places, but it was entirely intact with no missing parts. It was still perfectly serviceable.

Kino gave the camera a curious look. Once he was certain no one else was surprised, Hermes said, “That’s a really nice camera. Where’d you get it?”

“You see—” said the owner, explaining the circumstances.

Ten years earlier, a traveler happened to arrive in their country. He was only in his twenties, but had been gravely ill due to an injury he sustained on the road. The locals had desperately tried to nurse him back to health, to no avail. He died several days after reaching the country.

“Here…” the young man had said on his sickbed, “My greatest treasure…is yours…thank you for everything…”

“And now this machine is our country’s most precious possession. We take turns taking care of it and making sure it’s in good shape. Apparently it’s called ‘Theresnomorefilm.’”

“What?” “That’s its name?” asked Kino and Hermes, surprised.

“Yes. That’s the last thing the young man ever said.”

“At first, we had no idea. But we put our heads together and managed to figure it out. See here? You point this round side toward what you want a picture of. That way, the person holding the machine will see the image through this little window here. If we rotate the cylinder, the picture becomes clear. It’s a stupendous machine, don’t you agree?”

“Then you take this button on the upper right and more it to the right. If you let go of the button, it snaps right back. At that point, you can press this protruding button to the side just once. May I try it on you?”

Having received Kino and Hermes’ permission, the local with the camera peered into the viewfinder, centered the shot on Kino and Hermes, and pressed the shutter.

There was a slow metallic noise.

“What happened is that while I held down this protruding button here, you and Hermes disappeared from my sight,” he said, “And in that moment, I took a picture of the two of you into my mind. Thank you so much.”

“You see, this machine lets us take pictures of things into our memories. The picture of you entered my right eye and into my head, preserving itself in my mind. Now I can think back to this wonderful memory whenever I want and remember what it looked like. That’s why you disappeared for a moment.”

“Oh. I see…” Kino said, waiting for the local to continue.

“Now, would you allow all of us to use this machine to remember the two of you and your visit?”

Kino smiled and nodded. “Of course. In fact, we should get everyone else to join us.”