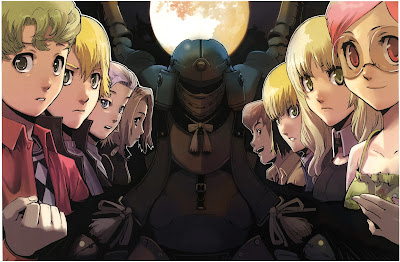 Trivia: Rudy, Theresia, and Melhilm are named after German filmmakers: Wim Wenders, Leni Riefenstahl, and Werner Herzog respectively. Is there any significance to this naming scheme? It is a mystery.

Anyway, Volumes II and III of Vamp! are finally finished.

Get the mobi version here, courtesy of Andyy.

Coming up next in the way of Narita works should be Vamp! IV, which features… a larger-than-usual cast, if that means anything to Narita veterans. Unfortunately, I don't have scans for this book or the one after it, and I won't have access to a scanner until next year, so you'll either have to put up with a text-only translation without any illustrations or wait until summer 2014 at the earliest for my craptastic scans. What would you prefer? Make your voice heard in the comments section! (Or better yet, direct me to full scans of the two books.)

In related news, I'll be taking a break from translation for a few weeks. I'm preparing for my move to Korea, and it'll take me some time to settle down and get everything in order.

As for my other projects, Allison will begin mid-September at the earliest, and I'm still (slowly) working on the second volume of About Death. *sigh*

Finally, the last chapter. There are four epilogues left after this, but I'm not sure yet if I want to group them all together or put them up separately. Anyway, enjoy!

...Yeah. This is one long chapter, so set aside plenty of time to read it.