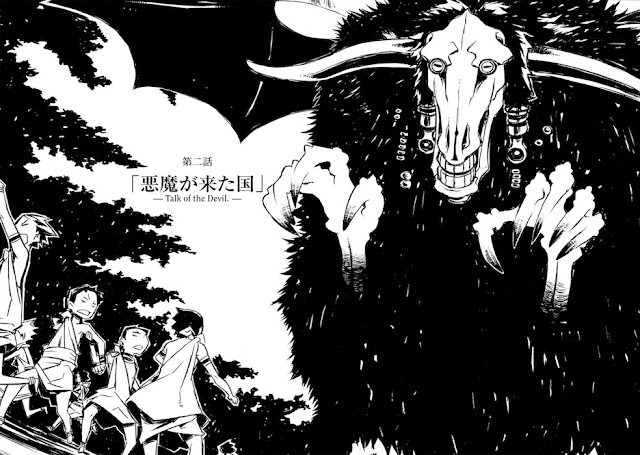 Chapter 2: The Country Visited by a Devil
-Talk of the Devil-

One more tale before you go off to dreamland, child?

All right, let me tell you a story I’ve never told anyone before.

Don’t worry, now. It may be a little scary, but no one gets hurt or goes to sleep forever. Now, listen carefully.

Just once, when I was still very young, I met a devil.

That’s right, child. Our country is the only place in the world where people live. People can’t survive anywhere outside.

That’s why we must stay here. The outside world is an inhospitable place.

We can only live here in the forest, protected by the trees. People can’t leave this place.

This land is the only way of life we have.

I was only twelve years old when the devil visited us.

One of the hunters told us that a young person came from beyond the forest, riding on a strange creature. The entire country was in an uproar! After all, no one could possibly have come from the outside.

Everyone thought the hunter was just imagining things after seeing an animal.

But the ‘person’ soon came up to the town square, riding a strange shiny creature that roared and huffed.

The ‘person’ politely said hello to us. It introduced itself as ‘Kino’ and its terrible mount as ‘Hermes.’ That creature could also speak our language, like a parrot.

We all thought that we were dreaming. Everyone was too surprised to think. After all, it looked human enough, but there was no way anything could survive outside our lands.

And what could we ever make of the shiny creature that could speak to us?

That was when one man stepped up.

It was the chief of the southern district. He went to the newcomers.

What a brave man! He deserved our greatest respect.

The chief bravely greeted them and said, ”Would you perhaps join us for some food?” It was just about lunchtime, you see.

That’s when the ‘person’ said, “Thank you. I was just getting hungry, you see. I’m very grateful.”

With that, it took a seat beside the chief in the town square.

The rest of us watched from afar. We couldn’t leave the chief on his own. So we stayed just close enough that we could hear them talking.

The ‘person’ and the chief sat side-by-side, eating together for some time. The chief talked about things like the weather, constantly waiting for a chance to ask one question in particular.

What question did he want to ask? He wanted to know who or what this ‘person’ was, and how it had come all this way from the outside world, where nothing can survive.

But before he could get that chance, something terrifying happened.

You see, the chief’s wife, who brought them tea, was wearing a small sack of butter hanging from her waist. That’s right. The very same butter people use every day. A little sack of fragrant butter, no different than the way we make them now.

The ‘person’ noticed that wonderful smell when the chief’s wife passed by.

“Is that butter? It smells wonderful.” It said to her.

The chief’s wife was flabbergasted, but she bravely answered it. But anyone could tell she must have been scared enough to scream and run at that point. “Thank you. It’s a special butter I made myself.” She then added, “Would you like to try it?”

The ‘person’ replied, “I would be grateful if you could spare some.”

The chief asked his wife to scoop some of the butter into a small bowl. And that’s exactly what she did. Then she held it out.

That’s when it happened.

The chief, his wife, and everyone else in town saw the whole thing!

It took the fork it was eating vegetables with, and used it to spread the butter over its bread!

Could you believe it?

Everyone was too shocked to say anything.

The chief was right there, watching from up close. His eyes were so wide I thought they’d pop out of his head. His wife looked like she was just about to faint there and then.

Took a big bite out of that piece of bread!

It gobbled it up, butter and all!

That’s when the chief, his wife, and everyone else finally realized the truth.

This ‘person’ was actually a devil!

It had to be a devil!

No one would put cosmetic on bread and eat it with a smile!

We always learned that devils are creatures that appear human, but behave differently.

That’s right. We were serving lunch to a devil.

Once he understood, the chief became calm. “I’m glad to see you’re enjoying your meal. Would you care for seconds? We have plenty more bread and butter!”

The devil that called itself Kino said, “By all means. Thank you very much for the wonderful food.”

The devil kept eating bread with butter until it finished the chief’s wife’s entire supply.

We were all very excited, watching the devil eat lunch. The chief got a little closer to it, and asked things like,

“Where do you hail from?”

“What is that large, loud, shiny creature?”

“How does it speak so well?”

“I’m coming from a place very far to the east. I’m on a journey, you see.”

“Hermes here is… He’s my partner. We’re traveling together.”

It politely answered all the chief’s questions.

That day, we made friends with the devil. But there was one thing:

“I would like to stay here for the next three days. Would that be all right?”

We had no choice but to turn down that particular request. After all, we knew well that devils transform into bats and moles at night to attack humans and turn them into trees.

The chief firmly turned down its request.

Maybe it was satisfied by all that butter. The devil backed down easily.

Then, it got back on that strange creature and left the country, beyond the forest.

You don’t believe me, child?

I'm not surprised, but I promise you, it’s all true. Every last word. I heard the devil’s voice with my own ears.

After that, the chief of the southern district told us that it would be best if we never told anyone this story. After all, nothing good would come out of letting people know that we had been visited by a devil. The chief kept it a secret from the High Elder until the very end.

There aren’t many people now who know this story.

And that is exactly why I wanted to tell you this story.

You don’t have to believe me, child. But this is the truth.

I once met a devil.

“Hey, the old man next door's talking to that old wooden doll again. I wonder what he’s saying?”

“Who knows? Let’s leave the poor man be. I’m sure he’s happy in his own little world.”