Please refer back to Volume VI for the preceding story. 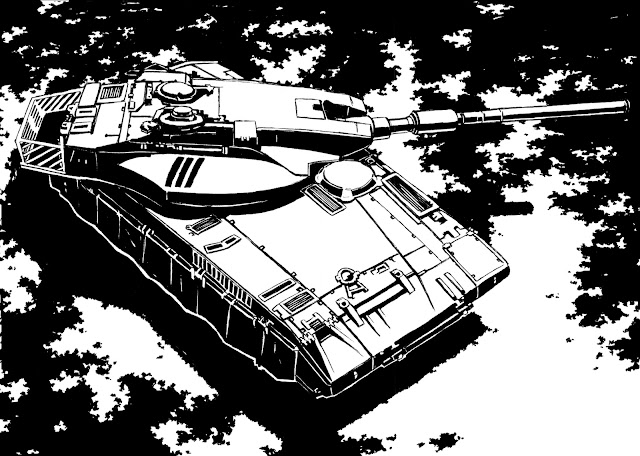 Kino gazed at the tank in the distance. It was black with three vertical red lines on the right side of its turret, and a tapir painted on the side. Kino’s eyes did not leave the tank until it had disappeared into the woods.

Not even the tank knew how much time had passed since then.

It wandered across fields, forests, mountains, and deserts. But no matter where it floated, it could not find the tank the captain commanded to destroy.

The tank continued on and on. Baked in the heat, drenched in the rain, battered in the winds, and buried in the snow.

It sat under the sun for months at a time to recharge. Rust grew everywhere, and the tank dropped many parts as it pressed forward.

One day, in the middle of a dense, unknown forest, the tank finally broke down.

“Captain, I am no longer able to move.”

The tank could neither move nor float. With a deep, heavy thud, it fell atop the fallen trees.

The tank could no longer think.

“It’s not totally broken. It can still move.”

The next time the tank thought, it wondered whose voices had come so close to it. It turned on the scope.

There. Two children had climbed atop its chassis, which had been buried under the fallen autumn leaves. A boy in a hat and a girl with her hair in pigtails. Both were about ten years old and dressed in oil-stained clothes.

Giggling, they brushed the leaves from the tank.

“Who? Are you? Who are you?” it said, breaking its long silence. It had not spoken since meeting the motorrad and the traveler a very long time ago.

The boy and the girl responded without missing a beat. “Hello, Tank! Hello!” “Hello! Wow, you’re not broken after all!”

Saddened, the tank replied, “I am not entirely broken. But I cannot move anymore. I cannot move. I am as good as broken.”

The tank went quiet and closed its eyes.

It decided to assume it was all a dream.

The tank could not believe its eyes.

Before it knew it, the tank had been surrounded by parts. Parts it needed to replace.

The boy and the girl were toiling under the morning sun. They hoisted the parts together and switched out old parts for the new. If the parts were too heavy, they used the crane on the small truck they had driven over.

“What are you doing? What is happening?” asked the flustered tank.

“We’re fixing you!” “We’ll fix you right up!” the boy and the girl replied, beaming. Even the oil stains on their faces couldn’t take away from their cheer.

“This is unbelievable. I am shocked,” said the tank.

The children continued their work, and eventually it was afternoon.

The tank was almost whole again. The children connected it to a generator, bringing its functions to life—even the lifter. The tank rose into the air for the first time in a very long time.

“Success!” “Success!” the boy and the girl clapped and cheered. The tank asked how they managed to do all this. They replied easily, “The boss taught us how.” “Yep, the boss.”

The boy and the girl explained that they worked for a great engineer. Fixing a broken car, for example, was literally child’s play to them.

The tank thanked the children. It used every word it knew to express its gratitude. The children responded with embarrassment.

“About this,” said the girl, holding up a box. Inside was one person’s worth of yellowed bones. Along with a set of ragged clothes and a persuader rusted beyond repair. “We found him inside. We learned that we have to bury dead people.”

“What do we do?” the boy asked tentatively.

The tank fell quiet. It thought, then opened its mouth.

“Please. Let him rest in peace, as is right for humans. I ask of you. I beg of you.”

They were so adamant that the tank could not argue. It followed their shaking little truck through the woods, felling trees as it floated low over the ground.

Around evening, the truck and the tank left the woods, climbed over a hill, and reached a small factory. Inside were machines for repairs and machines awaiting repairs. Vegetable patches dotted the area.

The children parked the truck at the factory and strode out with the box and a pair of shovels. Slowly, the tank followed.

The sky was a deep red and the setting sun lit up the clouds. The tank stood before a gravestone wrought of metal framing. The boy and the girl had dug a hole and buried the captain’s bones and belongings.

The tank thanked the children as they clasped their stained hands in prayer. It let them climb on its turret and took them home.

The next morning, the tank went to the children as they washed their faces at the well and asked what they did at the factory.

The children told the tank the truth.

They had once lived in a nearby country. Abandoned by their parents and left to survive in the gutters, they had been adopted by the engineer and taught to work with machinery. The factory belonged to the engineer, who fixed up abandoned tanks and armored cars from a war in the past and sold them to the next country.

“You will sell me? Is that why you fixed me?” the tank asked, shocked.

But the children shook their heads. “No.” “Tanks don’t sell. People only buy machines that till fields and sow seeds. So we mostly fix tanks into machines that do that. But we can’t do that to tanks that aren’t completely broken.”

“But the boss caught a cold recently and died.”

“He died. We shook him again and again but he wouldn’t wake up.”

“So we buried him on his favorite field. We thought he would be lonely, but now he has a friend.”

“They’ll be best friends from now on.”

The tank asked the children, “Was your boss good to you?”

“Yep!” the children replied in unison.

The tank said, “Two good men, buried together—I am certain they will be the best of friends.”

It started to drizzle in the afternoon.

Unable to enter the factory, the tank rested outside. Its weight pressed its tracks into the mud. The boy and the girl threw a tarp over the tank.

“You’ll catch cold if you get wet.”

“Tanks do not catch colds.”

The tank rested outside, protected from the rain by a tarp.

“I was fortunate to be rescued by these brave children, Captain,” it said to itself. “But I still cannot find it. Where in the world could my final target be? Where?”

The boy and the girl were hard at work inside, chattering all the while.

“The tank seemed down.”

“But we fixed him right up.”

“So let’s make him happy again.”

“Yeah, let’s make him happy. But how do we know if a tank is happy?”

“I know! We get all excited and cheer out loud!”

“Yeah. Because he was all alone.”

“Yeah! We weren’t lonely when the boss died because we had each other. So let’s make him a tank friend so he won’t be lonely, either!”

The children hopped in glee.

“It’ll be empty, but making the chassis is going to be a piece of cake!”

They abandoned their work and began to dig around for parts.

They put metal plating on a modified tractor.

They layered many sheets of paper and made a turret. They used fuel canisters for the cannon. Then the children painted it black. They painted three vertical red lines on the right side of the turret. And on the left, they drew the same strange animal they saw on the tank.

It was nighttime when they finally finished their work.

“We’ll show it to him when the rain stops tomorrow!”

The slow rain stopped early in the morning.

The boy and the girl pulled the tarp off the tank.

“Thank you very much,” said the tank, “but now I must go. I have a mission to accomplish.”

The children rushed into the factory.

Slowly, the tank roused itself. It activated its lifter, and with its armor plating trembling, it rose inches off the ground.

That was when it heard a sputtering noise. A tank emerged from behind the factory, crawling across the mud.

Inside the fake tank—

The children were giddy with excitement.

The tank slowly made its way forward. It slowly turned towards its target.

“Finally. I’ve finally found the target, Captain. Destroy the black unit with three vertical red lines on the right side of its turret, and a tapir painted on the side. I will accomplish this mission on the land where you have been laid to rest. Today, I finally carry out your orders.”

There was a heavy whir as the tank activated its turret. The 200mm smoothbore cannon smoothly, slowly, raised its fearsome head.

The tank went through protocol, just as the captain had taught him so long ago.

The red lamp behind the turret flashed. The turret swung, pointing directly at the slow-moving target. It adjusted slightly to match its target’s pace.

“Target locked… Awaiting permission to fire!” the tank cried for its absent captain.

The sound of sputtering continued on and on.

The fake tank stopped right in front of the floating tank.

The cannon remained completely silent, still trained on its target.

No one would respond.

Soon, the tank collapsed to the ground. It half-sunk into the mud.

The boy and the girl were chattering. Their voices came from the enemy tank. The flimsy plate-metal hatch opened, and two heads popped out.

Oblivious, the tank simply repeated itself.

They pulled out a large mirror they had brought from the bathroom.

The tank’s sights landed on the mirror. It saw the reflection of the half-sunken tank. 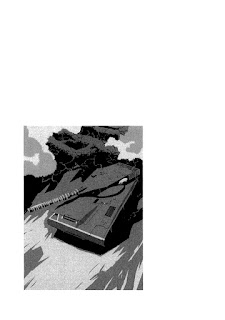 It learned the truth. And as though denying its realization, the tank swung its turret aside.

The moist gunpowder finally ignited, and a deafening noise shook the air. Dew was blasted clear off the grass.

The armor-piercing round flew at five times the speed of sound, disappearing into the distance in the blink of an eye.

A lonely factory stood in the middle of a green plain.

In front of it stood a large tank and a small fake tank.

The cheers of a boy and a girl resounded on and on across the land.