Sorry for the long wait. Here's the next chapter of Kino's Journey. 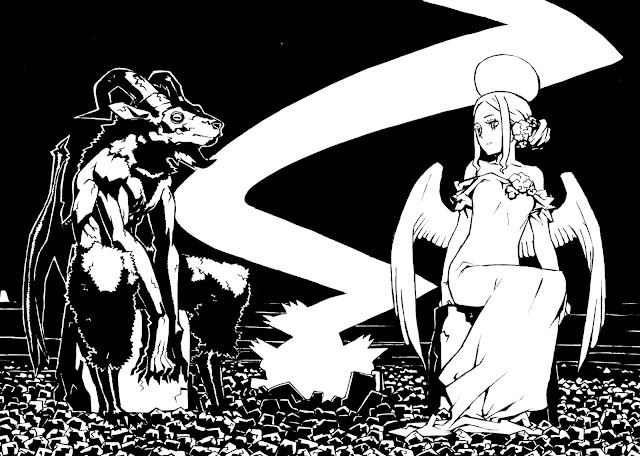 A river coursed across the wasteland.

The great stream cut through the great expanse of dirt and rock, carving into the earth with small strips of green lining either of its banks. From above, it looked like a green belt laid on a brown background.

Parked by the river was a truck and a small, battered yellow car. The sun fell close to the horizon and cast long shadows against the ground. The owners of the truck and the car sat around a campfire by the riverbank.

There were eight people in all: a fat, middle-aged merchant who owned the truck, his wife, and four bodyguards all armed with hand persuaders standing behind them. Across from the merchant, a young woman with dark hair armed with a large-caliber revolver. Next to her sat a slightly short but handsome man.

Large chunks of meat were sizzling on the grill over the fire. It was a mouthwatering sight.

“It’s so good to meet other people on the road,” the merchant said jovially, “Do help yourselves.”

The merchant was as generous as his waistline was broad. He explained that he was on his way back from a very successful venture, and was in a particularly charitable mood.

The slightly short but handsome man replied, “This looks positively scrumptious!” while discreetly signaling the woman with his left thumb.

The signal meant, ’What should we do? Jump them and take what we can get?’

The woman ran a finger over her pinky nail. It was another signal. ‘The bodyguards might be a hassle. We’ll behave ourselves this time.’ The man nodded.

Thanking the merchant, the travelers accepted his invitation and joined the peaceful dinner.

The merchant signaled for wine in a ceramic bottle and offered some to the travelers. However, they declined.

“I understand completely,” the merchant said, “So it’s true what they say about travelers avoiding drinks. I suppose it is a bit difficult to take the stuff with you on the road.” He took a big gulp from his cup.

The sun had set almost completely. The meal was in full swing.

Flushed deep red with alcohol, the merchant gave an uproarious laugh. “I have to say, I’m envious of life on the road! Free to go where you will!” He had lost control, but neither his wife nor his bodyguards intervened. “By the way, Miss!” the merchant said, looking the woman in the eye, “There must be a reason you’re traveling the world at your age. Are you by any chance a ————?”

The slightly short but handsome man froze. The merchant continued.

The woman responded with soulless replies, like ‘Of course’, ‘That’s right’, and ‘Yes’.

Her companion sat in quiet dread, whispering, “Let’s not lose control, Master,” under his breath. The merchant, completely and utterly drunk, kept guzzling his wine without a care in the world.

Though he may not have meant ill, the merchant was being incredibly offensive—and loudly enough for perhaps even other countries to hear.

His insulting ramblings went on for some time. But the dark-haired woman continued to give composed, neutral responses. Her companion was starting to marvel at her patience.

“I’m so sorry,” said the merchant’s wife, finally breaking her long silence. But she did not sound apologetic in the least. It sounded more like she was making an excuse to join the conversation. “He’s a good person when he’s not drinking.”

“I see,” the woman replied, looking up. She noted the bodyguards’ positions and drew her revolver.

Before the slightly short but handsome man could react, and (naturally) before the bodyguards noticed, four gunshots had shattered the ambience of the wasteland.

The shots had struck the bodyguards’ persuaders, leaving them unarmed. Everyone watched in shock as the woman pointed her revolver at the merchant’s forehead.

“Now hand over your valuables.”

The sun had just disappeared over the horizon, casting a dim veil over the world. The bodyguards sat on the riverbank with their hands tied behind their backs, and the merchant’s wife trembled behind her husband.

“Wh-what is the meaning of this?!” demanded the man of the hour, now completely sober but red with rage. “Scoundrels! Repaying my generosity with violence?”

The dark-haired woman replied, “Don’t worry, we’re only taking 30 percent.” She began to stuff a sack with jewels and money. Her companion stood watch in complete silence, .22 caliber automatic persuader at the ready.

“That’s my money!” the merchant spat.

“And now it’s my money,” the woman emphasized. She took her fill of valuables and left the rest in front of the merchant.

Then the woman ordered her companion to deflate the truck’s tires to slow down the merchant and his group. The man took care not to damage the tires as he opened the valve and emptied each one.

“Please excuse us. Thank you for dinner,” the woman said. She climbed into her car, started the engine, and called her companion over.

The merchant was in an uproar. “You rotten thieves!”

“I’m so sorry,” said the slightly short but handsome man, “She’s a good person when she’s not shooting anyone.”