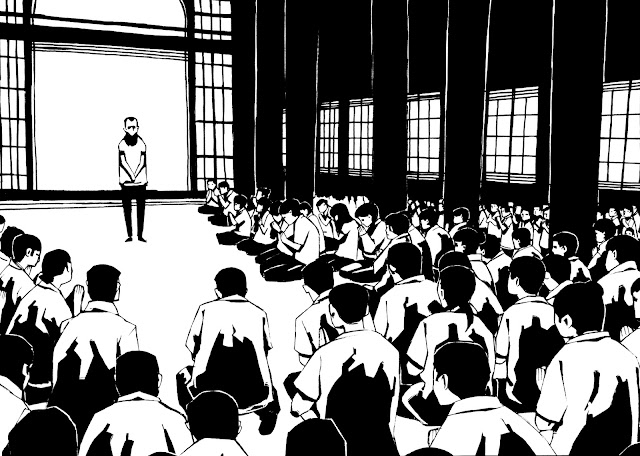 Chapter 4: The Country of Salvation
-Confession-

Once upon a time, there was a traveler named Kino.

Though very young, Kino was a master with the persuader.

Kino’s travel partner was Hermes the motorrad. They wandered from one country to another, with Kino’s things heaped on Hermes’ luggage rack.

One day, they arrived at a certain country.

It stood amongst trees that towered so high that Kino’s neck started to hurt. The walls were covered in ivy, almost camouflaged in the woods. It was late spring with a comfortable breeze in the air. 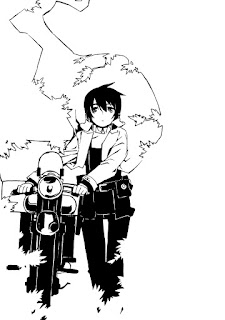 “Yeah,” Kino replied, “We’d never have found this country if someone hadn’t told us about it.”

When Kino requested permission for a three-day stay, the guard welcomed their first visitor in ages and let them in. The gates opened with a heavy thud.

Beyond was an open plain. Pastures and fields stretched on into the horizon, with cattle making their way across at a leisurely pace. The country was large, but it had a small population and was not technologically advanced. Smoke was starting to rise from the chimneys of the log cabins, perhaps because it was just about sunset.

They went to the center of town to find lodgings. Kino asked around for inns or hotels, but no such facilities existed because they had so few visitors. The kindly villagers, all dressed in farming clothes, gathered together and opened up a room in what seemed to be their town hall. It had been a very long time since Kino last slept in a bed.

“What’s that commotion?” Hermes grumbled, waking up early for once.

Loudspeakers hanging from utility poles were blaring some sort of music and chanting. The chanting was incomprehensible, recited in an unfamiliar accent like a magic spell. The music was just as confounding, almost enough to question the composer’s qualifications.

As usual, Kino rose at dawn, exercised and did persuader drills, took a shower, and had breakfast—rations, as there were no restaurants—and turned to Hermes.

“I really like this country. For once I don’t have to smack you awake.”

Hermes replied, “Very funny. But what do you think that weird music is supposed to be? …Oh, it’s stopped.”

“I’m curious too. I thought I’d seen everything, but I guess I was wrong. Let’s go see what’s going on.”

And they were swarmed by people.

What shocked them most was the way the people were dressed. They wore alien clothing that Kino and Hermes could not begin to guess at the purpose of, completely different from anything they had ever seen on their travels.

The people asked Kino and Hermes if their religious ritual seemed genuine.

“Was this a ritual?” Kino asked, confused.

The people explained that they had been taking part in a religious ritual, that the faith was shared by countless people the world over, and asked if Kino was not a believer, if their country’s rites seemed just as genuine as the ones Kino clearly must have seen in other countries, and if she thought it was good enough to be accepted by their god.

“Er…” Kino hesitated. “I’m ashamed to say that I’m from a very small country and know very little about your religion. And I’m afraid my visits to other countries have always been too brief for me to observe their rites. I’m terribly sorry.”

Kino was clearly not telling the truth, but Hermes played along in silence.

The people in the strange clothing seemed a little disappointed by Kino’s response. But they quickly recovered and offered to teach Kino all about their faith.

What followed were lectures on the greatness of their religion, its incomprehensible doctrines, and their utterly alien rites. Hermes fell asleep.

Kino did not find relief until lunchtime, when the townspeople gathered at the hall for food. She felt much better after the veritable feast.

One middle-aged woman said over tea, “If only we’d known about the faith sooner. It’s lightened the burdens on our hearts.”

Hermes asked, “Oh? When did it come to your country?”

Kino and Hermes were surprised to learn that the religion had only been brought to the country ten years earlier. A missionary had come to their land, and the faith had spread in the blink of an eye.

The missionary could have easily wielded great power and lived a life of luxury, but he supposedly lived in a small home on the outskirts of the country, occasionally meeting community leaders.

“We wouldn’t be here without him. This country owes its existence to the man,” said one of the men.

Kino asked, “What do you mean?”

The man explained on behalf of everyone else. Ten years ago, the country had faced a terrible crisis: crops refused to grow, livestock did not bear young, dangerous weather conditions persisted, disease ran rampant among the population, and children were not obeying their parents.

Hermes mumbled to himself, “Talk about an exaggeration.” But the people remained dead serious.

Despair and helplessness had flooded the country, and the people were on the verge of taking their lives when the missionary arrived in the guise of a humble traveler.

The missionary had told them, “If you do as I say, you will find peace in your hearts.”

The country had once had a traditional faith of its own, but the people gladly forsook the gods who had failed to lift a finger for them and adopted this new faith. They desperately prayed and hoped and performed the ceremonial rites.

“And then came the miracle.”

Crops began growing again, livestock bore many young, the disease was eradicated, the weather calmed down, and the children became obedient. The land prospered and people were happy and well again.

Kino took a bite out of her biscuit. “I see.”

That was when a man stumbled inside in a panic. “B-b-b-b-b-big news, everyone!”

“Please calm down,” someone said. “Remember, God is watching.”

“Y-yes, but you see! The missionary says he wants to meet the traveler alone!”

“The man rarely meets anyone but the leaders of our faith community. Remember that meeting the missionary is a great honor, and take care not to offend!”

With the villagers’ warning in mind, Kino and Hermes headed to the missionary’s house.

They followed the messenger’s truck all the way through the country, past fields and pastures as the people on the farms waved.

“Just follow this road all the way and you’ll see his house. Again, please take care to not offend the missionary.”

Kino and Hermes went into the forest at the edge of the country. Soon they spotted a small log cabin in the woods—the missionary’s home.

When Kino stopped Hermes’ engine, a man stepped out the door.

He was middle-aged, wearing a plain button-up shirt and slacks. The man was very skinny with tidy hair and a clean-shaven face.

“Welcome. Please come in, both of you,” he said quietly.

Kino pushed Hermes inside and propped him up on his center stand by the table. 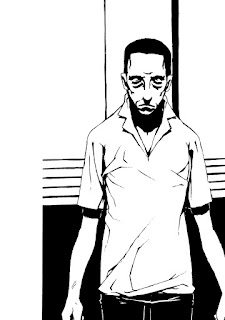 The man offered Kino a seat, and sat down across from her. He steepled his fingers and gave a dark look. “Did you tell them?”

Kino and Hermes did not understand what he meant.

The man continued. “If you did, I will make sure you never leave this land, even if it means mustering the entire country to stop you.”

Kino finally caught his implication. “What exactly do you mean?”

“About the religion I brought to them,” the man replied.

Hermes said, “I knew it was a sham.” The man twitched. Hermes went on without a care. “Otherwise we’d have heard about it at some point.”

“That doesn’t matter. If you tell them, I will kill you. You will not leave this country alive.”

“Then I’m leaving you behind.”

Some time passed in silence.

“Do you have anything else to tell us? May we go back to sightseeing now?” Kino asked.

The man nodded. But the moment Kino rose, he stopped her. “This is all a sham…I was just making things up as I went…”

Hanging his head, the man went on. Kino stared quietly at him. Hermes asked, “You’re not a missionary, are you? Were you a traveler?”

“That’s right,” the man replied, “I was a traveler. And a wanderer. I didn’t even know there was a country here when I arrived ten years ago.”

“Why did you lie to them? Were you trying to trick the people?”

“No. I was just trying to help. I was walking through town, and saw an exhausted little girl. I taught her a lucky spell my grandmother used to recite to me when I was feeling down. I would have been perfectly happy if it had ended there and she went home happy.”

The man explained what had happened. The little girl had been cheered up by the strange, nonsensical babbles the man taught her. It had been a silly charm meant to encourage her, but she took the story home to her parents and raved about the man. The impoverished and desperate family then went to visit the man in the same room Kino was lodging in now.

The man had combined nonsense spells and exercises from his childhood to fabricate a prayer routine. “The family took my nonsense teachings to their neighbors, and soon they spread like wildfire through the town.”

Eventually, the entire country had been turned believers. Countless people flocked to the man to seek salvation.

“I didn’t want to tell them the truth…”

The man did not push away the people who went to him. He preached to them, ‘This faith has saved the souls of countless people in my homeland and others! It will bring you happiness!’ At times he would spontaneously make up teachings, and at other times he would spend sleepless nights thinking of new rites. He composed music for the first time to create a hymn, and promoted festival garb he had seen on his travels to the people of the country.

“…Such simple, innocent people,” the man muttered, head resting on his hands. 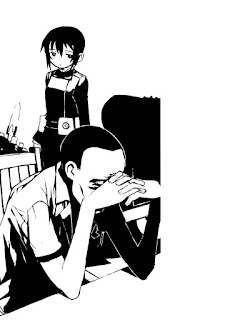 Hermes said, “This is interesting and all, but why are you telling us? Do you want Kino to get you out of here? Do you want to escape?”

The man looked up. Kino flinched.

“Never!” he cried, eyes brimming with tears. There was a magnificent smile on his face. “I never want to leave this place! I am going to stay until my dying day!” he declared, clenching his fists.

“Because…” the man began, trying to laugh. But he fell quiet and put his fists on the table.

And as Kino and Hermes stared, he began to weep. Tears ran down his face like rivers, streaming down and dripping onto his lap. 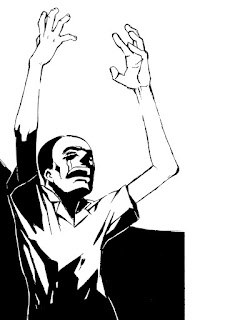 “Because…because I found salvation here,” he said, choking on his sobs, “I never wanted to be a traveler. I left home because I couldn’t stand being there anymore, being treated like scum for being born into the lower class. I couldn’t take it anymore.”

The man pulled up his fists. He looked up into the sky and opened his arms wide, as though reaching for the heavens.

“And I made it here. To this country that needs me! This country saved me!”

Kino and Hermes watched silently as the man wept.

“This place is paradise! I was saved by this land!”

Kino turned around and pushed Hermes outside. The wailing man did not see them leave.

“Ahh… There is no god in this world. But! But if there is, I beg of you, please don’t take this place away from me…let me stay here forever…God…”

Epilogue>>
Posted by Untuned Strings at 08:26