And that's a wrap! I'm all caught up with the Etsusa Bridge series.

I'm working on a pdf/epub collection for the series right now; it'll be up sometime in the next couple of months. The collection will include the author's afterwords and revised translations of earlier novels in the series.

So what's next? I'm taking a break from the Naritaverse until the next volume of Vamp! or 5656! is published. I've been working on Narita's books for nearly four years straight at this point, and I'm starting to get burnt out on his stories--this short update took me days to translate!

For the time being I'm going to focus on Keiichi Sigsawa's Meg and Seron, a series I highly recommend. Sigsawa and Narita are similar in that they're writers from an earlier generation of light novels, before the trend of harem series with very long titles. And if the author's intro section in a volume of Durarara!! that shows Narita holding Sigsawa at gunpoint means anything, they're also good friends. So do yourself a favor and check out Kino's Journey and the Allison series as well!

Thanks a lot for reading, and enjoy the final 5656! update.

Here's the first chapter of Meg and Seron. This is also the first update that's safe to read if you're avoiding spoilers for Lillia and Treize.

Meg and Seron I: Summer Break of the Year 3305 - Prologue 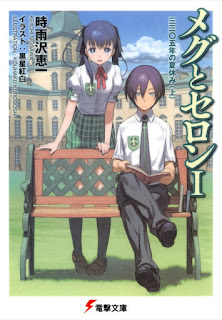 It's short enough to be a preview, but here's the first update for Meg and Seron. This series is a 7-volume spin-off to Lillia and Treize, which takes place at around the same timeframe. Unlike the other series in the 'verse, Meg and Seron is a down-to-earth school life series focusing on the goings-on at the 4th Capital Secondary School. Expect no elaborate descriptions of aircraft or firearms here--do expect some fluff, hijinks, and a dash of photography geekery.

This update also serves as a very brief epilogue of sorts to Lillia and Treize (the anime actually ended with this prologue, which I thought was a good decision). This naturally means that this update contains spoilers for the ending of Lillia and Treize! The rest of the series, however, is safe to read for those who have not finished the Allison or Lillia and Treize books.

I've omitted the dramatis personae page from this update because it spoils some of the characters from later in the book. I'll put it up at the beginning of the next volume.