Another update. Remember, there will be very few illustrations from this volume, as I don't have access to a scanner.

Here's the first chapter of Allison I. If you haven't already noticed, there's a new link in the sidebar: the AWLTMS Database. It contains all the information so far presented in the series, and hopefully I'll come back to update it after each chapter. Allison's world is huge and full of interesting details, so please check it out! (Warning: Always read the latest update before going to the database.)

On that note, please suggest different name spellings for terms on the list that have katakana listed next to it. Allison takes place in something resembling Europe, so I need mostly suggestions from people with knowledge of European languages. Thank you in advance! 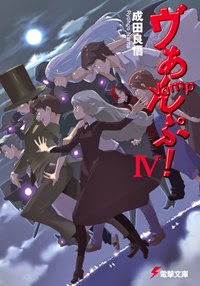 [My sincerest apologies for the wait, ladies and gentlemen! It has been much too long. Ah, in the spirit of wishing for cordial relations between you and I, allow me to tell you a tale about the relationships between vampires and humans. There was, you see, a mass disappearance in southern Germany. Our Organization called a meeting to discuss this incident, but at the same time, Young Mihail left the island of Growerth with some resolution in mind! Naturally, my daughter Ferret followed after him to the mainland... If only it had ended up a bittersweet elopement between two young people... What will come of the connection between this human-vampire couple? Tragedy? Or romance? I truly look forward to seeing what you think of this long, long tale that stretches on even to this very day.] 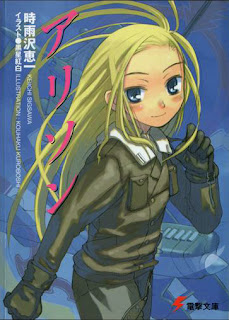 A very short update (bordering on being a preview), but here is the prologue of one of Keiichi Sigsawa's other light novel series, Allison. My opinion? I came for Sigsawa's writing and stayed for the worldbuilding. It's very good, although the first volume isn't quite as amazing as the rest of the series.

For those not in the know, Allison and its sequel Lillia and Treize were adapted into an anime series called Allison and Lillia several years ago. The general consensus seems to be that the anime was enjoyable, but wasn't completely faithful as an adaptation (Don't quote me on this, though, since I haven't seen the anime in a long time. All I can say is that I think one of the main characters was completely miscast).

(A note for those who've only watched the Allison and Lillia anime: The novels involve graphic violence. If you're not comfortable with gory imagery and description, you may want to avoid the books.)

As is apparent from the cover page, this is a series that has lots to do with flying. As is the case with Gakuen Kino, there may be inaccuracies and inconsistencies in my descriptions of aircraft-related exposition. I'd appreciate all the help I could get.

As is not apparent from the cover page, this is a series that takes place in something like a fantasy version of Europe (culturally speaking, anyway). As is the case with Vamp!, I'm going to need help with many of the proper nouns; most of the names seem to be pseudo-European in origin, so I'd appreciate all the help I could get.

Allison has three books, divided across four volumes. The sequel, Lillia and Treize, is composed of six volumes. The spin-off, Meg and Seron, is seven volumes long. And finally, the finale, Tale of a Single Continent, is two volumes long. Hopefully I'll get around to working on all of them within my lifetime.

Uh... this preamble's longer than the actual update, but take a look, and stay tuned for the first chapter!